Posted by abaldwinson@tng.com on November 15, 2013

TNG is excited to have been part of a several successful events this past week. Duck Dynasty star, Si Roberson has been on a book tour that has been hugely successful. A great article in the Northwest Guardian, provided the highlights of the signing at the JBLM Lewis Main Exchange on Veterans Day. 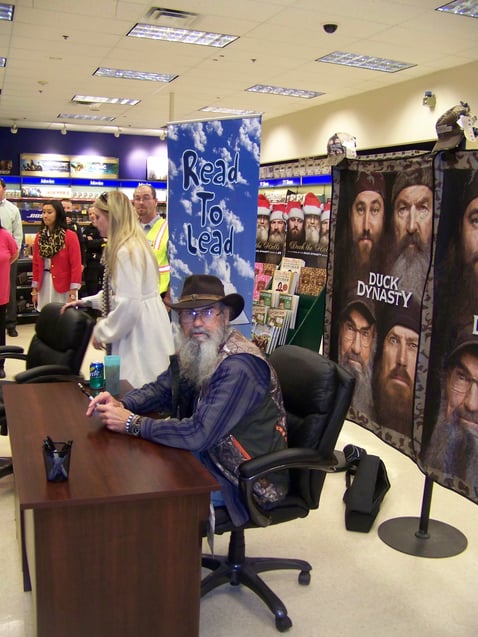 Si Robertson, star of the hit-television show Duck Dynasty, signed thousands of copies of his new book “Sicology” for active duty and veterans at the JBLM Lewis Main Exchange on Veterans Day.

Dawn Guess was a woman on a mission — setting up camp outside the Lewis Main Exchange at Joint Base Lewis-McChord at 2 p.m. Sunday afternoon.

Her husband, Chief Warrant Officer Troy Guess, was also in line and was able to get another five signed copies.

The four-hour event was originally scheduled to start at noon, but due to the large crowds and people camped inside the Exchange overnight, Robertson — with his famous blue cup filled with unsweetened tea at his side — started an hour-and-a-half early to help get as many people through the line as possible.

“Si is a very down-to-earth person,” said Patrick McGhee, general manager of the Lewis Main Exchange. “What better honor than to serve the ones you’ve served on Veterans Day.”

Robertson retired as an Army sergeant first class, serving from April 1968 to February 1993. Robertson was a material control and accounting specialist with stops in Vietnam and Germany and multiple installations throughout the country.

For a self-described country boy from Louisiana doing his first installation book signing, having the opportunity to meet those currently serving and the rest of the JBLM community humbled Robertson.

“The military will always have a special place in my heart,” Robertson said. “To me, it is an honor to see the faces of the new Army.”

Several were dressed in camouflage and left the Exchange happy with their signed copies and thankful for the opportunity to meet the Vietnam veteran turned television star. “I’m just glad he came here of all places to do this for us,” said Sgt. Justin McFaul, who brought his wife and 13-month-old daughter Morgan. “It shows he really cares.”

While not everyone had a chance to talk to Uncle Si for more than a short moment, they were still able to say they met a celebrity who once served the same way many of them have.

Jennifer Smith, the director of publication for Simon and Schuster, said in past signing events, they’ve only been able to get 1,000 people through the line, so more than 3,000 on Veterans Day was a surprise.

The appearance broke the JBLM record out of approximately 2,600 celebrity events at the Exchange — formerly held by Twilight actor Peter Facinelli in 2009.

More than 3,500 copies of the book sold in the days prior to the signing event.

“Nobody has sold that many books here,” McGhee said.

Leeroy Perkins, national sales representative for TNG Retail Services, said he had to call for a driver from his company’s warehouse in Fife to bring the remaining unsigned copies to JBLM.

Because of the success at the Exchange, Perkins said he’s going to be letting all of his contacts at major book publishing companies know that JBLM is a must for a signing event.

“If you’re not sending them to (JBLM), you’re missing the boat,” Perkins said. “Is print dead? Not out here apparently.”"

Home / TNG Retail | I am a Retailer